Geekery comes in many forms, but I have always been particularly susceptible to the uniquely Teuchter variety. Now, before you leap to conclusions, no, I cannot name you every model of Massey-Ferguson ever to set wheel upon the Isle of Lewis; nor am I qualified to identify a brand of dip merely by its bouquet. However, I enjoy the complexities of Calvinist theology and of crofting regulation in almost equal measure. It has been easier to indulge the former, because there are places you can go and books you can read which will help the picture clear.

Crofting legislation, on the other hand, has been a right patchwork quilt. Now, however, someone has actually written ‘A Practical guide to Crofting Law’ – that someone being the well-kent lawyer, Brian Inkster, a bit of an expert in the feannag of crofting law and all its associated vagaries. This is not a legal tome for professionals, but a very usable little book which covers all the main aspects of crofting and its relationship with the law of the land (yes, pun intended).

I warmed to it immediately when I saw that page 1 of chapter 1 contained the word, ‘therefrom’. He was only placing crofting in its historical context – something I do myself fairly frequently for bored students – but couldn’t suppress a lawyerly adverb even at this early stage in the proceedings. 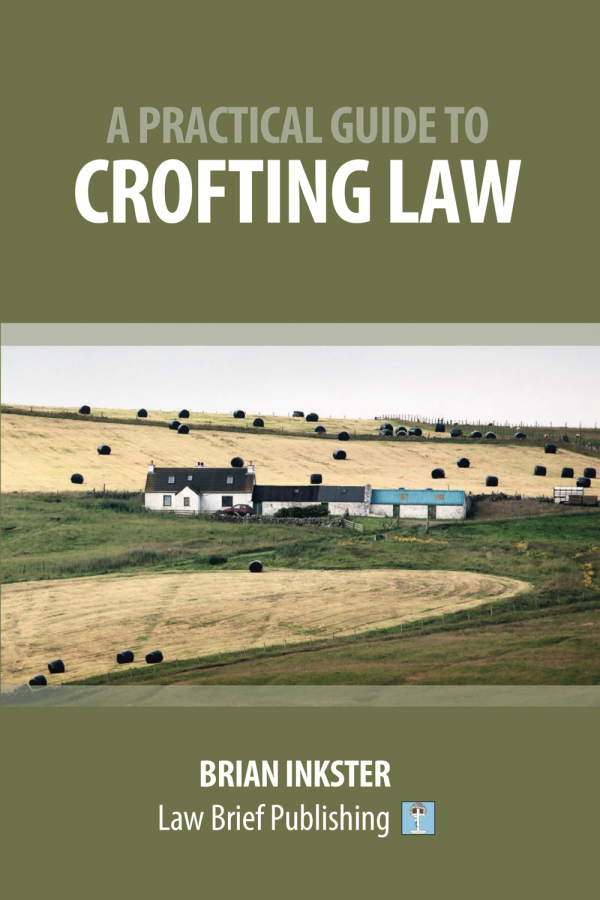 It’s a depressing feature of life in the Gàidhealtachd that any description of who we are or what we stand for must always involve talking about organisations. We are surely the most regulated people in all of Creation. Reading Mr Inkster’s description of the Crofting Commission and the Scottish Land Court, I couldn’t help smiling to myself. All our resident malcontents (and more than a few non-resident) pile the blame onto churches for the perceived stifling way of life here, but no one ever seems to wonder quite why we need so many bodies to keep an eye on our language, our land, our economy – and that’s before we even get started on the plethora of environmental designations that Scottish Natural Heritage has at its disposal. Before you put a spade in the ground, you’d better find out if it’s a RAMSAR site, an SSSI, an NNR . . .

We have accepted it, though, as our lot (pun eile) in life. Like every other endangered species on the planet, the Gael has to be subject to much monitoring and scrutiny. There are more schemes and safeguards linked to us as a people than your average violent offender.

Everything, from the air that we breathe to the words that we use is subject to policy. If I start a business, join a committee or put up a polytunnel, there is an agency that needs to know. We have island plans, community partnerships, rural networks – all designed to protect us. We are like wayward teenagers, not trusted to get the bus home by ourselves in case we talk to strangers.

Ah, but, Mr Inkster’s book brings us neatly, in chapter sixteen, to that wee glimmer of freedom – the Teuchter equivalent of turning twenty one and being given the key of the door: community buyout. You’ll have heard of it because it’s been quite the apple pie and motherhood of the Gàidhealtachd over the sixteen years since the 2003 Land Reform Act was passed. The Act afforded the crofting community a right to buy and become its own landlord – not piecemeal, croft by croft, but to purchase an entire estate as one crofting body if so desired.

Now, I’m not rubbishing this development. It’s difficult to, when you recollect the heroism of Assynt, and of Eigg, in challenging absentee landlordism before there was tailor-made legislation to assist their endeavour. What I am merely pointing out is that the crofting community right to buy is something that had also to be granted via an Act of – albeit the Scottish – Parliament. It is arguably benevolent in its tendency, but still regulation nonetheless. Mr Inkster refers to the ‘Scottish ministers’ many times in this short chapter, reminding even the most gung-ho of community trusts that they have what they have at the behest of government, and of the reams and reams of law which have made it possible.

It’s easy to fool ourselves that we are freer than we actually are. Human beings are incredibly gullible, and very liable to convince themselves that there exists no authority higher than their own. That anyone from the seven crofting counties still believes this to be the case is extraordinary, when you consider the weight of legislation under which they live, move and have their being.

When I was a child, we marked the centenary of the 1886 Act, which put the word, ‘crofting’ onto the statute books for the very first time. It has always been cited as a great stride forward and, I suppose it was in many ways. But it was also the beginning of state-sponsored interference in a way of life which had existed previously on its own terms. Yes, it mitigated against some of the worst excesses of private landlordism, but it also sank the Gael into that abiding sense of being a permanent ward of state.

I think we are more at risk than ever these days of regarding ourselves as ‘looked after’. By the time the centenary had come and gone, organisations like the Crofters (as it was then) Commission, the HIDB and even the embryonic Scottish Crofters Union were household names. The folk leading the organisations and formulating policy were known to those most affected by their decisions. Even more crucially, those leaders were affected by their own policy too – because they lived in the communities regulated by these organisations.

Quietly, insidiously, the state moves the machinery that regulates Gaeldom further and further from its beating heart. Leadership has to come from within – for our land, for our language, for our economy, for our very way of life.

I, for one, am tired of seeing the Gàidhealtachd being run like a colony from Edinburgh. It’s long past time for the natives to get restless.

‘You’ll have been picked up by the CCTV’, the elder informed me solemnly on Sunday. I had tiptoed past his gate early on Saturday morning, glad rags from the previous night’s carousing in my hand, and thought that I might just get away with it. The confusion of waking up in a strange bedroom in Stornoway had probably been at fault; after all, experience should have taught me by now that wayward women cannot fly under the surveillance system of the Free Church: EL-DAR.  There are Wee Free drones everywhere, and they can’t all be watching clothes lines.

I had gone out at the respectable hour of 6.30pm on Friday evening, to enjoy a meal and some speeches in a local hotel, to mark the occasion of the Estate Factor’s 25th year in post. We were doing so a year after the actual event because . . . well, they had been waiting for a blone to be elected in order to remember stuff like anniversaries, and organise parties . . .

A good time was had by all. Appropriate gifts were presented, including an inscribed shepherd’s crook, upon which the gentleman of the hour proceeded to lean in a rather too-settled manner as he articulated his thanks. I imagine there will be many future occasions when he leans similarly upon the stick, and regales his audience with wisdom from his considerable store.

Aside from providing the owner with a prop upon which to lean, however, the shepherd’s crook has a much wider variety of functions.

In fact, for those tasked with the management of sheep, there may be a requirement to travel over rough ground, and it is an aid to them on the journey. Anyone who has ever walked the moor will know the value of any prop which will help you stay upright, and out of the bogs.

Of course, your crook may well come in handy as a weapon too. Your flock can easily fall prey to predators – especially the lambs – and it makes sense for the protector of the flock to have a stick that he can wield in their defence.

And, the curved end of the staff is perfect for hooking a sheep around the neck in order to catch or move it to where you wish it to go.

While any and all of these functions might well be exercised by our Factor – either in his private capacity as a crofter, or his professional role as Estate manager – I am going to resist the temptation to speculate here on how he might use the crook to steer wayward Trustees. Far be it from me, either, to suggest how he might deploy his new weapon against . . . but let’s just leave that there.

A couple of weeks ago, the Factor put me right on an important point of theology. (I should point out that, though his duties are surprisingly wide-ranging, this is not normally considered one of them). He reminded me that sin could be committed in the thought, just as much as in the word or deed and, thereby, threw a carefully-constructed view on a given matter into total confusion. I have still not resolved that particular inner conflict.

But then, the Truth does not exist in order to make us comfortable with sin.

Theology, in fact, might well be seen as performing the same role in our lives as that shepherd’s crook, if it is deployed dextrously and for the purpose for which it was intended. And, make no mistake, by ‘theology’ here, I do not mean man-made rules, or academic theory: I mean the Scripture proofed truths which meaningfully direct our lives towards God.

When I have found myself in the terrain that, sometime or another, meets all Christians, I have been – on occasion – slow to reach for the supporting staff of theology. At this point, I am tempted to lean on another one altogether: that of my own wisdom. Let me tell you, though, nothing is guaranteed to sink you in the mire quicker than your own faulty reasoning. That is why Proverbs 3: 5-6 says,  ‘Trust in the Lord with all your heart, and do not lean on your own understanding.  In all your ways acknowledge him, and he will make straight your paths’.

At those times when I have failed to do this (and they are many), the next thing that happens is I leave myself vulnerable to the enemy. When I miss the means of grace, when I let my prayer life weaken, when I fail to open the Word as often as I ought . . . of course the enemy senses that I am distant from the rest of the flock. He moves in slowly, preparing to pick me off. But God has given his people the crook to use as a weapon also; Scripture has so many reminders that there is nothing the enemy can do against the power of Christ. For me, the battles with Satan have been won many times through the strengthening of Psalm 27, and its triumphant reminder:

The Lord is the stronghold of my life;
of whom shall I be afraid?

But, sometimes I find that the Shepherd still has to hook me around the neck, and pull me to himself. Wherever I am, however, no matter how far, his reach extends there, and he will draw me gently and lovingly back. It may be that he achieves this through the preaching of his Word; but more often, it is actually through the love that he communicates via his own people who are, of course, my people.

Like the shepherd’s crook we presented last weekend, then, God’s Truth is lovely, but its real beauty lies in its purpose: to support, to protect, and to draw us to Himself. If we make use of it, then it will uphold us in any situation.